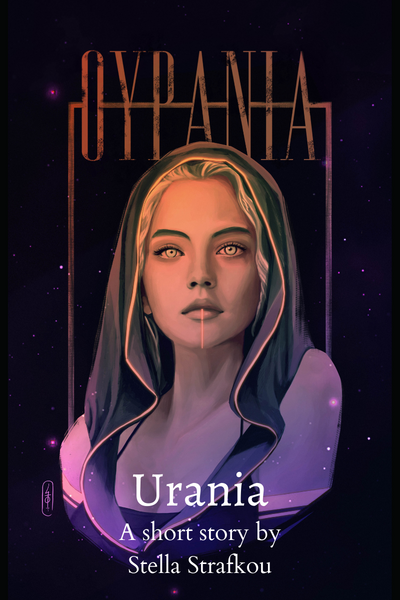 Notes for better experience: Musagetis = Apollo, leader of the Muses

Her eyes widened in the hearth light, while her compass circled the vellum. The night had fallen several hours ago, while Urania was studying, constantly looking up and down.

From the first moment of her birth, her eyes gazed at the night sky glittering with stars and planets. After all, this is what her divine nature craved; hence her name, Urania.

She was one of the nine Muses, perhaps the most beautiful and loveable ones. Her night-trained eyes read the constellations like the palm of her hand. For her each twinkling star signified an end, but also a new beginning.

She knew that something new would soon begin for her. The time had come.

Urania looked up tucking her blonde, curly strands behind her ears.

She was waiting for him anytime now.

A gust of wind and his form filled the space. It was dark, but his wicked eyes stood out like two glowing stars.

Urania remained where she was, lowering her gaze.

Her brother – on their father’s side – sat by the fire leaving the lyre – made by a fine tortoiseshell – beside him.

“I didn’t know that Muses get cold…,” Hermes commented playfully.

“I didn’t know that Gods could be late,” Urania answered back.

“A God arrives at the right time; nor sooner, or later.”

Urania smiled. Hermes may have been cunning, but he had a pearl of wisdom within that no one could question. She stretched her back and took a deep breath.

“Hermes, are you going to tell me what I know, don’t you?”

I am well aware that you know. I am here just to change your mind if this is possible for a Muse, who spends all her time gazing up at the sky. You are a dreamer and your stubbornness reaches the top of Olympus; we all know that. But this child must not be born. If he is born… he is meant to die … by our hand, by a god’s hand,” he said,.

Her breathing stopped for a moment; it wasn’t something she wasn’t familiar with, but hearing it from another person – her brother – made it more palpable and terrifying.

“This is the human’s fate,” she answered.

“And what is your fate? Is that what you want? To feel love for a human creature, and lose him in the prime of his life? “

Urania was agitated and the compass suddenly fell from her delicate hands.

She looked up; Hermes had already disappeared.

The first rays of the sun found Urania lying on the chest of her beloved Amphimarus. He opened his eyes smiling and kissing her on the forehead with affection. Her swollen belly foretold the fruit of their love. Urania felt their child inside her alive and kicking; ready to conquer the whole world.

A slightly melancholic child, with his talent for the lyre and his ethereal voice, who enchanted his mother and his aunts. He played sad melodies touching Gods’ and people’s hearts. Urania taught him the hymns of the heavens, the songs of the stars, and the Gods. Linus insisted to sing about people and their passions, about the sorrow of love, and the death of emotions.

“Mother, I wonder, what will you do when I’m gone?” he asked her one day, at the tender age of fourteen. Urania tightened. Her lips became a straight line, unable to speak.

Urania, ready to cry, took him in her arms.

“Oh, my son, make sure to be able to stand on your own feet and leave your mark on earth. When you look at the stars you will always find me there … at the sky”, she answered him, with tears in her eyes.

Linus followed his mother’s advice; he continued to play and sing, becoming a great and famous songster, inventing rhythms, and teaching younger and brilliant musicians. Orpheus was one of them and together amazed the crowds with their divine and unique skills in playing the lyre and hymns.

Linus became one of the Orphics and soon one of the greatest songsters of his time; of all times. Traveling from place to place, sometimes teaching or taking part in ceremonies, his mind always was in the place where he was born, Thebes.

Returning after many years, he was welcomed with feasts and banquets. Linus, although modest, could not deny the joy of his fellow men.

The cheers and comparisons of Linus with the God Apollo soon reached Apollo’s ears. Lino’s presence and great artistry teased Apollo, and under his blind jealousy challenged him to a match, not just any match, but a musical one.

Linus knew that this fight would bring his end.

He knew very well that he would not defeat Musagetis Apollo.

His end was near; it happened.

Apollo was not sorry for killing Linus at the end of the fight and his undisputed victory in the lyre match.

Thebans mourned Linus, with the same hymns that he mourned as long as he was alive.

Urania did not eat, neither did she sing for the victory of Musagetis that day. But she knew, that from that moment and for the following centuries, her son, Linus, would never be forgotten; neither by Gods nor by humans…